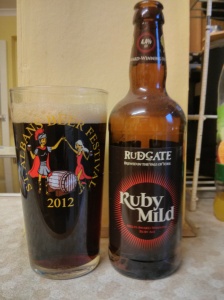 For the next part of this bottle-top tour of Yorkshire, I’m heading a few miles to the west of York, to the village of Tockwith, and the Rudgate Brewery, established in 1992, and shared with the Marston Moor Brewery.  I’ve previously reviewed the York Chocolate Stout (though that won’t stop me having another taste later in this series), but I’m going to start with the Ruby Mild.

This 4.4%ABV ale is a deep red colour, with an almost light brown head that fizzes excitedly as its poured from the bottle.  There ‘s not a big aroma to it – maybe hints of caramel and hazelnuts – but the flavour is rounded and far from dry, as a good mild should be.  The hazelnut aroma is carried through to a very nutty finish in the flavour too.  This is a highly refined and enjoyable beer that would work as well with more delicately flavoured food as it would as a session ale.

And it’s not just me that likes this beer.  In 2012 it was awarded the Gold Medal for Mild Beers at the CAMRA Great British Beer Festival.

This is a great start to this exploration of the beers of this award-winning brewery.  Next into the glass is Rudgate’s Battleaxe.  Looking forward to that one. 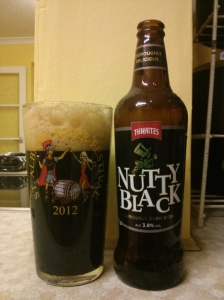 Thwaites Nutty Black says that it’s a curiously dark beer, and yes, it’s dark, though I’m unsure how curious it is!  It’s a deep, deep red colour with a light tan head that lasts well.  The aroma is slighty nutty, though this is not too pornounced.  The flavour isn’t too heavy for such a dark beer:  malty and slightly liquorice, and this flavour lasts well.  To be honest, this beer might be one of just four that have been named as Champion Beer of Britain twice, but I find it really hard to describe how it is distinctive (and this is the second time that I have tried to review Nutty Black, having given up once before).  This 3.9% ABV bottle-conditioned ale would go well with something like a treacle sponge pudding or any other similar sweet and robust hot dessert.

When the weather is as cold and miserable as it has been of late, I wonder why beers like York Brewery’s Stocking Filler are promoted as Christmas ales.  I found this one knocked down to £1 a bottle at the York Brewery on a visit there last weekend and thought that it had to be worth trying, and I’m so glad that I did.  The bottle describes its contents as a 4.8% ABV dark premium bitter, and elsewhere as a ruby ale:  my experience is that the colour is just on the brown side of red, and the taste isn’t really what I think of as a bitter either!  So my only criticism is of the description on the label!  There’s a beautifully creamy head that lasts quite well, and the aroma is rich and spicy (as advertised) – mainly cinnamon.  The taste is equally rich, with strong chocolate and malt flavour and spicy notes (exactly as it says on the bottle).  The snow has been threatening to start falling all day but this ale will keep me warm, so all I need is the sound of sleigh bells and a hearty ‘ho, ho, ho’ to get me in the mood for Christmas!!!

Gunhill is another beer from Adnams’ Sole Bay Brewery in Suffolk.  My first impression was that it was a brown ale, but I can see now that the beer has settled in the glass that it’s a deep ruby red.  On pouring, it has a lively head that thins but remains across the beer, and there’s a strong aroma of honey.  The beer has a flavour of butter, dried fruit and a slight hint of lemon, and an ABV of 4.0%.  Adnams has a great sustainability record, and I’m glad that by drinking this beer, I’m indirectly (through Adnams) making a contribution to the Prostate Cancer Charity.

Sharp’s Winter Berry Ale was on sale at a pub close to my office, and I thought that it would be rude not to try it.  This cask ale is a beautiful  deep red colour with a head that disappears almost immediately, with the beer thereafter resembling a glass of slightly flat cola.  The aroma is mainly cherries, which is the berry that gives the ale its name, and it hints at something that is sweet and not unlike some of the Belgian cherry beers.  The surprise therefore is that it’s nowhere near as sweet as its continental counterparts, which for me means that it’s a beer that I could enjoy all evening.  One criticism:  once you get past the taste of the cherries, there’s not a lot else:  the flavour is quite one-dimensional and I  would probably have enjoyed something with a bit more malt.  Enjoyable for a social drink on a cold winter’s day, nonetheless.  For the recod, the ABV is 4.8%. 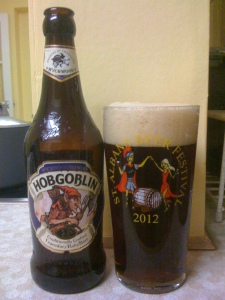 I do like Wychwood’s Hobgoblin.  It’s a deep ruby red colour with a creamy head that quickly melts away until it is just thick enough to cover the surface of the beer .  It smells of toffee and those tones are carried through to the flavour with added hints of chocolate and dried fruit.  This 5.2% ABV ale would stand up well to roast beef or venison, or a hearty meat pie.  Unfortunately it’s likely to be the last Wychwood ale that I review for a while as I need to restock!  Definitely not for the faint-hearted!

Posted by stephengg on February 9, 2013 in Ruby

Theakston Old Peculier is a beer that takes me back to my undergraduate days in York, and I’m reviewing it this week because I’m using another bottle of it to make a stoverij (a Belgian recipe for beef in beer).  The beer is a very dark red with an off-white, almost brown head that quickly reduces to just enough to cover the top of the glass.  The smell is like treacle and mince pies while the taste is rich, warming and rewarding, slightly sweet, but not bitter.  There are definite hints of lemon and Christmas Cake and even liquorice in the taste, though as a student, I’d have been more interested in the 5.6% ABV.  It’s a beer that welcomes you home on a cold winter’s day with a great big warm hug, and it’s a beer that never fails to satisfy.  Highly recommended (and if that’s not good enough, it also features in my copy of ‘1001 Beers you must try before you die‘, edited by Adrian Tierney-Jones and published by Octopus Books).

If you’ve never tried stoverij, it’s definitely worth it served with thin chips/fries, and there’s quite a good recipe here.  Use a well-flavoured brown ale, or even Guinness for the best results.