And finally, the third of my three 4% ABV blonde ales from Marstons, all brewed to the same recipe with the exception of the hops used.  This third ale uses the 200 year old english Goldings variety.  Once again, the beer is a light orangey amber colour, and this time it has a head that is creamy and really lasts.  There’s a lovely aroma of caramel, which continues through to the flavour, and this is a great balance for the classic english bitter taste.

This group of three beers has been a real enlightenment, and a great demonstration of the effect that the choice of hops can have on the character of a beer.  I’d like to have tried more but unfortunately didn’t manage to track down further bottled examples (though I understand that the original plan to create twelve beers – one for each month in 2012 has been extended into 2013).  I’ll continue to keep my eyes open for more examples, though… 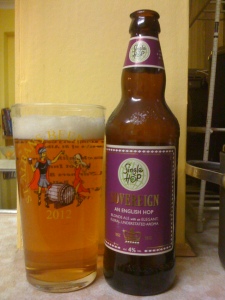 So now to the second of my three 4% ABV single hop blonde beers brewed by Marstons to the same recipe, with the exception of the hops.

This time the hop is Sovereign, an English variety that produces a beer that has a slightly lighter amber colour than the Marynka, and with a head that lasts somewhat longer.  The aroma is somewhat more subtle than the Marynka too, floral, and only slightly herby.  The taste is hugely different, though;  biscuity, buttery and much less dry.  This is a very enjoyable ale, appealing to my English palette very well.

The Single Hop Marynka is one of a range of single hop ales brewed by Marstons.  I really like the idea:  create a range of beers where the only difference between them is the single variety of hops used, and so showcase the hop, and the contribution that it makes.  All of the beers appear to have a 4% ABV.

This first of the series that I’m sampling uses the Marynka hop.  The bottle tells me that Marynka is a comparatively new hop, developed in Poland around 25 years ago.  The ale is a light amber/orange colour with a head that dissipates very quickly.  The aroma is very fruity, and just a little spicy and floral (though I couldn’t detect the claimed herbal tones).  The flavour is slightly fruity at first but then quite dry and bitter.  It’s an interesting ale, but not one that I’d necessarily be queuing up for.  More interesting will be how the next two single hop ales that I have from the same brewer compare with this.

This is my second attempt to review Marston’s Pedigree.  The first time I tried, I left it an hour or two between drinking and attempting to review the ale, and couldn’t remember anything about it!  Pedigree claims to be a classic English pale ale, created in a ‘Cathedral of Brewing’, and to be the Official Beer of England.  So it promises a lot.  It’s a light tea colour, with a faint toasty nose.  It has a fairly sweet taste that is followed up by a light bitterness.  It’s the sort of beer that I could quite happily drink on a night out with friends, but for a beer that promises so much, it really under-delivers on flavour.  It weighs in at an equally bland 4.5% ABV, and at the time it was purchased, was selling for £1 a bottle in Sainsburys.

Posted by stephengg on December 9, 2012 in Pale Ale 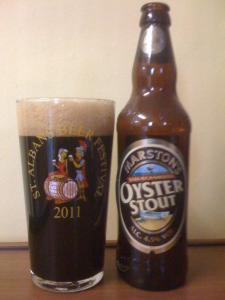 Marston’s Oyster Stout is something of a favourite of mine. It has an ABV of 4.5% and as the bottle states is dark, rich and smooth. In fact that’s something of an understatement as it’s very rich and very smooth, with a toasty flavour from the malted barley and chocolatey mocha flavoured aftertones. This is a beer to be savoured and enjoyed – a real adult ale. Very strongly recommended. 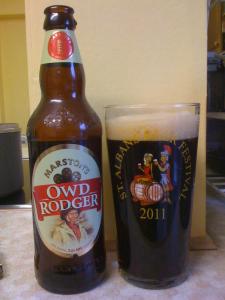 Marston’s Owd Rodger is a strong (7.4%) and rewarding ale. It’s rich dark, malty and fruity – not a little like drinking an alcohic and liquid malted fruit loaf. Strongly recommended.

Old Empire from Marstons is indeed a Pale Ale, though it’s been nowhere near India. The bottle describes it as having a bitter taste, but I beg to disagree. At 5.7% it’s got a well-rounded flavour with, to my mind, suggestions of a rich malt whisky about it (which isn’t surprising given the malted barley in the brew). Great for a Sunday evening.