So from the village of Tockwith just to the west of York, my mini tour of Yorkshire breweries takes me to Pocklington to the south and east of that city, and the Brass Castle Brewery.

The bottle tells me that Brass Castle is a nano brewery and like others that I’ve acquired, Sunshine India Pale Ale is bottle conditioned (so I made a mental note to pour carefully).

This 5.7% ABV light ale is a light copper colour and pours without any discernible head (so once poured, this ale as it quietly bubbles away resembles a glass of a well-known and traditional energy drink).  There’s a faintly floral and fruity aroma, and the flavour is a surprise:  orange with hints of caramel, almost sweet, with a bitterness that hits the tongue only after all the other flavours have made their presence known.

This has been an interesting experience, and I’ve got three more beers to try from this small Yorkshire brewery. Can’t wait. 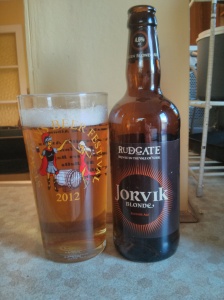 This is a blonde that is worthy of the name.  Jorvik is a delicious pale gold colour that looks refreshing from the moment that it is poured.  There’s a light fizzing head and the aroma is lemon and fresh.  It’s a beer that delivers on taste too, a little bitter, but with that refreshing lemon note and a hint of honey. This is a truly enjoyable ale and at 4.6% ABV isn’t going to stop me from having another!  Would be great on its own on a warm summer’s day (like today), or with salad and a barbecue.

Next beer from Rudgate Brewery is Battleaxe Bitter, a delightful 4.8% ABV copper brown ale.  The aroma’s quite fruity, and the flavour is reminiscent of orange and hazelnuts, nicely dry without being overly so.  This is another great example of a beer of its kind form Rudgate, this time the archetypical bitter.  This could be a great session beer, but would go well with cheese too, or a ploughmans lunch, sitting outside the pub, on a warm Sunday afternoon.

Next up:  Rudgate Jorvik Blonde.

For the next part of this bottle-top tour of Yorkshire, I’m heading a few miles to the west of York, to the village of Tockwith, and the Rudgate Brewery, established in 1992, and shared with the Marston Moor Brewery.  I’ve previously reviewed the York Chocolate Stout (though that won’t stop me having another taste later in this series), but I’m going to start with the Ruby Mild.

This 4.4%ABV ale is a deep red colour, with an almost light brown head that fizzes excitedly as its poured from the bottle.  There ‘s not a big aroma to it – maybe hints of caramel and hazelnuts – but the flavour is rounded and far from dry, as a good mild should be.  The hazelnut aroma is carried through to a very nutty finish in the flavour too.  This is a highly refined and enjoyable beer that would work as well with more delicately flavoured food as it would as a session ale.

And it’s not just me that likes this beer.  In 2012 it was awarded the Gold Medal for Mild Beers at the CAMRA Great British Beer Festival.

This is a great start to this exploration of the beers of this award-winning brewery.  Next into the glass is Rudgate’s Battleaxe.  Looking forward to that one.

York Brewery’s 5.4% ABV Centurion’s Ghost Ale is a deep red black ale with a beautifully creamy head.  The aroma is of coffee grounds and this is carried through to the taste, along with burn toast and malt whiskey.  It’s a big taste and the best of the range from York Brewery that I’ve reviewed.  This is a beer that I could enjoy all evening (in moderation) but would also go well with steak frites.  Very highly recommended.

Yorkshire Terrier is the latest in my series of reviews of York Brewery’s excellent ales.  It’s 4.2% light coppery gold ale with a light head.  The aroma is fragrant and floral, and the flavour itself is dry, hoppy and full of orange zest.  It wouldn’t be my choice as a session ale – it’s maybe a little too bitter/dry for my taste – but it’s a very clean, fresh taste, and if you prefer a hoppy ale, this one might suit you very well indeed.

York Brewery’s 4.2% ABV York Minster Ale is a light golden bitter.  It smells of very little at all, to be honest, but the flavour is a good, strong dry bitterness, with plenty of zesty hops.  It’s a much more robust sustained flavour than the Guzzler, and as bitters go, I really like it, but personally prefer Guzzler.  I wouldn’t drink this with a meal, but wouldn’t turn down a pint at my local pub.

Posted by stephengg on June 9, 2013 in Bitter, Golden Ale 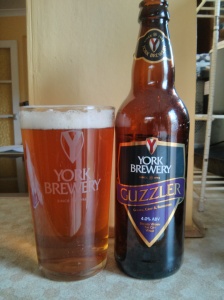 To get me started on my series of reviews of beers from Yorkshire based breweries, I’m starting at the York Brewery itself, with the excellent 4% ABV Guzzler.  This is a light gold ale that pours with a light but enduring head.  The ale smells of citrus and elderflower, and the taste is light on malt, with subtle notes of citrus lemon.  Unusually, the tasting notes match my own assessment of the beer.  It would be great with a salad, or a very enjoyable session ale.  Highly recommended. 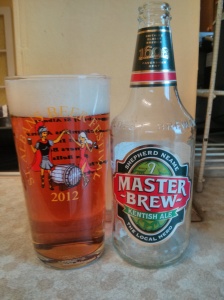 To be honest, I wasn’t expecting very much from a beer with the uber-generic name “Master Brew’ and costing only £1 per bottle, but I’ve been very pleasantly surprised by this offering from Britain’s oldest brewer Shepherd Neame.  I was in for a very pleasant surprise, therefore!  This 4% ABV light amber coloured ale pours with a lively light head that settles quickly but lasts well.  There’s a strong hoppy aroma, with a well-rounded but complex flavour that has a slightly dry bitterness layered over a light, malty base with hints of ginger nuts and lemons.  £1 well spent, I’d say.

I’ve been waiting for the right time to try this bottle of Dark Star’s Espresso for quite some time and this is it!  The beer was the SIBA National Champion speciality beer in 2009, so my expectations were pretty high, and so far, have been exceeded.  The colour of the beer is deep, dark, and almost black.  It has a thin tan coloured head that rapidly dissipates, and the aroma is of coffee grounds, and almost nothing else.  The coffee beans that are added to the brew are also responsible for the flavour, in which roasted malt is married perfectly with the espresso from the coffee.  It’s a dry, grown up taste, to be savoured.  I wouldn’t drink with food, and while I’d be tempted to replace a real espresso with this beer, it’s too big a flavour to follow most meals.  Nor is it a session beer (not unless you’ve got a coffee addiction).  I’d recommend drinking this beer on a cold, probably winter’s, evening, ideally in front of a blazing fire.  And while it’s not really relevant, the ABV is 4.2%.

This beer features in World’s Best Beers: 1000 Unmissable Brews from Portland to Prague

by Ben McFarland and Adam Tierney-Jones’ 1001 Beers: You Must Try Before You Die.