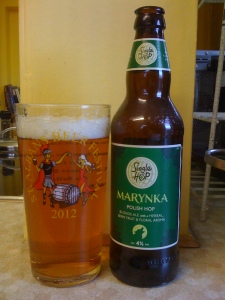 The Single Hop Marynka is one of a range of single hop ales brewed by Marstons.  I really like the idea:  create a range of beers where the only difference between them is the single variety of hops used, and so showcase the hop, and the contribution that it makes.  All of the beers appear to have a 4% ABV.

This first of the series that I’m sampling uses the Marynka hop.  The bottle tells me that Marynka is a comparatively new hop, developed in Poland around 25 years ago.  The ale is a light amber/orange colour with a head that dissipates very quickly.  The aroma is very fruity, and just a little spicy and floral (though I couldn’t detect the claimed herbal tones).  The flavour is slightly fruity at first but then quite dry and bitter.  It’s an interesting ale, but not one that I’d necessarily be queuing up for.  More interesting will be how the next two single hop ales that I have from the same brewer compare with this.